Get the Intel
Get the Gear 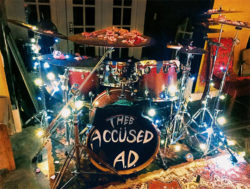 The music for Crush The Machine was recorded at House Of Tain in Milwaukee, Oregon, The Magic Closet in Stayton, Oregon, and Mondo Generator Studios in Salton Sea, California. Mike IX’s vocals on “Bullet for .45 (Straight From A .45)” were recorded by Sanford Parker at Hypercube in Chicago, Illinois, and Blaine Cook’s vocals on “Searching For A Reason” were recorded at RGP in Portland, Oregon. The tracks were mixed by Mr. Ian Watts at The Magic Closet and mastered by Nick Townsend at Townsend Mastering, and the EP completed with cover art by Dirty Donny and layout by Emma Maatman.

Southern Lord will release Crush The Machine digitally on October 30th, with the 7″ vinyl to follow a month later. Watch for digital preorders to post at this Friday, October 2nd at Bandcamp HERE and the label webshop HERE.

“A perfectly appropriate title for this 7-inch EP of jack-hammering, old-school style hardcore tunes released by Southern Lord, written and played by a rogues gallery of real deal music lifers as a condemnation of the criminal Trump administration and republican party, in the same spirit of those by-gone days when Ronald Reagan or George Bush was the crooked, self-serving president of the crumbling United States empire. Never before has there been a more obvious target, as Donald Trump and his mafia family cabinet rape the country while Rome burns. D.E.A. is Tony Avila, Ian Watts, Nick Oliveri, Mike IX, Blaine Cook, and the legendary and beloved, late producer and drummer of Poison Idea, Steve ‘Thee Slayer Hippy’ Hanford. Dying shortly before the completion of this record, it stands as a final testament to his genius, one last hot-wired blast of his epic musical brilliance.” – Mark Lanegan, August 2020

Crush The Machine Track Listing:
1. Dead White Hands
2.Twitter Troll
3. Bullet For 45 (Straight From A .45)
4. Searching For A Reason